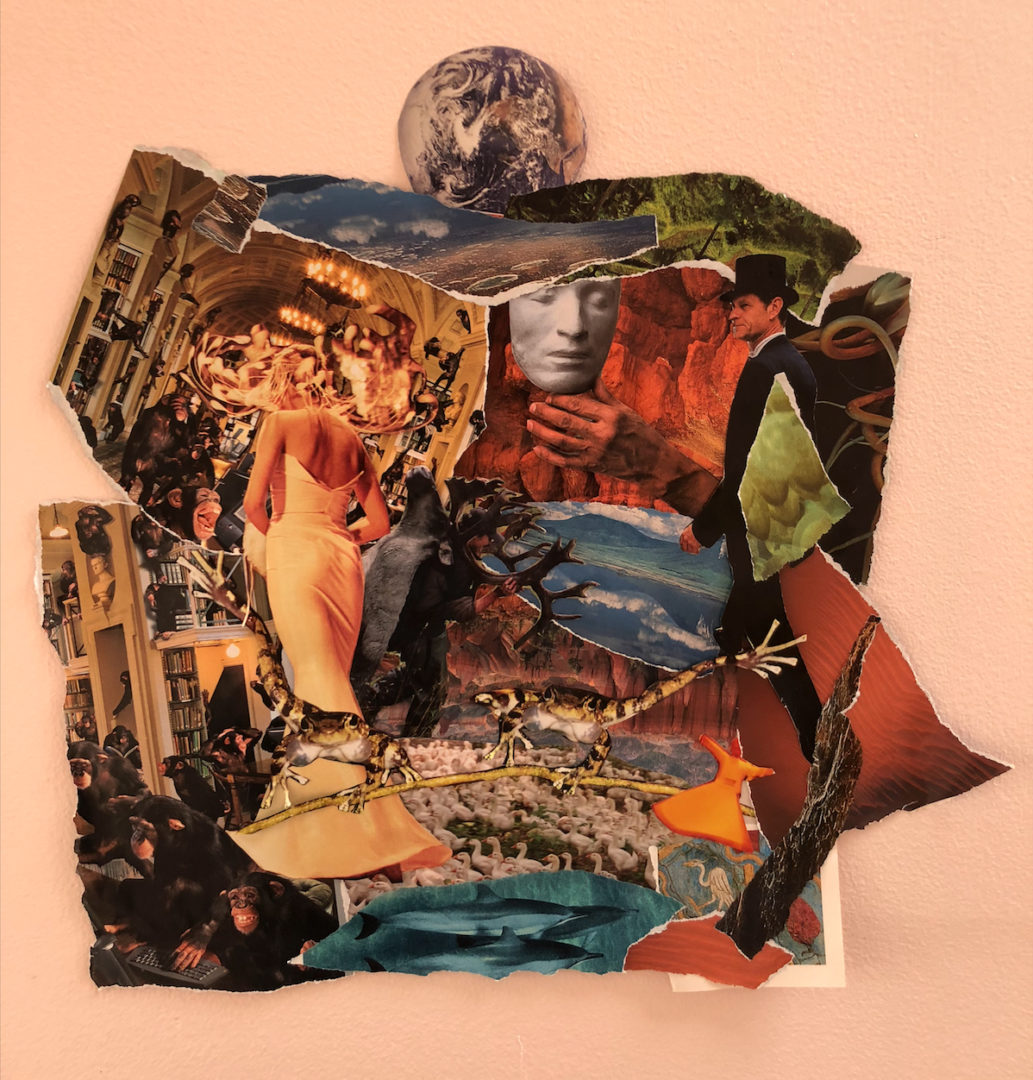 With this collage I make a shift to doing collective demon-God feeding.  I am working now not only with personal level demon-Gods, but with those that effect Earth.  Here is Diane di Prima’s magnificent poem, rant, to accompany the ally of imagination:

You cannot write a single line w/out a cosmology
a cosmogony
laid out, before all eyes

there is no part of yourself you can separate out
saying, this is memory, this is sensation
this is the work I care about, this is how I
make a living

it is whole, it is a whole, it always was whole
you do not “make” it so
there is nothing to integrate, you are a presence
you are an appendage of the work, the work stems from
hangs from the heaven you create

history is a living weapon in yr hand
& you have imagined it, it is thus that you
“find out for yourself”
history is the dream of what can be, it is
the relation between things in a continuum

yet it is not lonely,
the ground of imagination is fearlessness
discourse is video tape of a movie of a shadow play
but the puppets are in yr hand
your counters in a multidimensional chess
which is divination
& strategy

the war that matters is the war against the imagination
all other wars are subsumed in it.

the ultimate famine is the starvation
of the imagination

it is death to be sure, but the undead
seek to inhabit someone else’s world

THE ONLY WAR THAT MATTERS IS THE WAR AGAINST
THE IMAGINATION

you do it in the consciousness of making
or not making yr world
you have a poetics: you step into the world
like a suit of readymade clothes

or you etch in light
your firmament spills into the shape of your room
the shape of the poem, of yr body, of yr loves

the war of the worlds hangs here, right now, in the balance
it is a war for this world, to keep it
a vale of soul-making

bring yr self home to yrself, enter the garden
the guy at the gate w/ the flaming sword is yrself

The imagination is not only holy, it is precise
it is not only fierce, it is practical
men die everyday for the lack of it,
it is vast & elegant

the polis is constellated around the sun
the fire is central